Find me on:
LinkedIn

The COVID-19 pandemic has forced many employers across the U.S. to implement work-from-home policies as a way to help stop the spread of the virus and resume daily business operations. Work-from-home policies might include a 14-day quarantine for individuals that have recently traveled to hotspots, flexible work shift schedules, or even the strict direction to work-from-home until further notice.

With so many employees working remote, it’s essential that employee time is being accurately recorded and that employees are compensated in compliance with local, state, and federal wage and hour laws. However, properly classifying employees is one of the most challenging aspects of HR compliance.

The Fair Labor Standards Act (FLSA) overtime requirement makes it essential that employees be classified correctly as exempt or non-exempt. Changes in the regulations delineating the “White Collar” employee exemptions have greatly contributed to the employee classification conundrum. According to the Department of Labor (DOL), it’s estimated that 1.3 million American workers are now eligible for overtime pay as a result of the recent change in the minimum salary requirement for exempt employees.

Exemption from overtime eligibility under the “White Collar” employee exemptions are, generally, determined by two factors: salaries and job duties. Although the regulations provide descriptions on how to differentiate between exempt vs. non-exempt employees, 70% of employers continue to get it wrong.

Even when an employee appears to meet the standard for exemption, a close reading of the regulations and a full understanding of the employees’ duties is necessary. Employers must look beyond an employee’s job description and examine the level of impact an individual makes on an organization’s decisions and operations.

Misclassifying employees is a costly mistake. 79% of the cases pursued by the DOL for wage and hour infractions result in employers having to pay back wages to employees. In addition to paying back employee wages for up to three years, employers also face the potential that the case may turn into a collective action, having to pay an equal amount of liquidated damages, steep legal fees, and disruption to daily business operations.

In this case, two welding inspectors sued their employer, Gulf Interstate Field Services, on behalf of themselves and a class of similarly situated welding inspectors for failure to properly pay overtime, contending that they were improperly classified as exempt.

Originally, the Sixth Circuit dismissed this case as the employees qualified for the highly compensated exemption under the FLSA regulations because the employees were paid above the minimum salary threshold, paid during the specific period, and paid a consistent amount each period.

Since the pay was measured per day worked, something that could change from pay period to pay period, even with working six consecutive days, the court ruled that the amount paid per pay period was not guaranteed and could be reduced based on the demand for work. Therefore, these employees did not meet the salary-basis test and should’ve been classified as non-exempt.

Employer Takeaway: Employers should understand that the DOL might look at all types of documentation including offer letters, promotions, memos, probation letters, and any other employment-related documents. It’s also important for an employer to keep a file of all employment documents in the case of a reverse scenario where the documents can protect the employer.

In the primary case, two financial adviser trainees sued their employer, Merrill Lynch, a subsidiary of Bank of America, on behalf of themselves and a group other trainees for failure to pay overtime for a five-stage training program that required trainees to work more than 60 hours per week and on weekends.

The New York federal judge rejected the arguments that these employees should be exempt and granted conditional class certification, forcing a settlement.

Under the settlement, each one of the 9,500 ex-trainees were entitled to $1,000 plus legal fees resulting in a $14 million pay out by Merrill Lynch.

Employer Takeaway: Employers should strongly consider paying employees that are going through training on a non-exempt hourly basis. Training compensation should be regardless of whether these hours are during a two-week orientation or after regular working hours because the trainees are not participating in any managerial tasks.

In this case, a senior artist sued their employer, Activision Blizzard, for employee misclassification resulting in unpaid overtime. The employee was responsible for the creation and insertion of graphic images into video games.

The employer determined that senior artists were considered exempt employees as they qualified for the creative exemption under FLSA regulation because the work required “invention, imagination originality, or talent in a recognized field or creative endeavor”. This employee made over a six-figure salary, which would exceed the highly compensated exemption as well.

The employee stopped working overtime hours, shared with other senior artists that they were misclassified and should demand overtime, and was ultimately let go for insubordination.

Employer Takeaway: An employer needs to engage in a regular analysis of exempt employees’ as these often change. When in doubt, consult a lawyer.

In this case, a building manager for St. John’s University sued their employer, Total Management Solutions, for employee misclassification resulting in unpaid overtime. The employee attended management meetings, supervised 5-16 employees, and performed duties that included ensuring building cleanliness and setting up rooms for meetings. His annual salary was $80,000.

The employee also performed work at off-campus dorms and athletic venues. The employee stated that he performed non-managerial duties 90% of the time and that under FLSA regulations, he was entitled to overtime pay.

This case was originally dismissed concluding that the employee qualified for both the administrative and executive exemptions because the employee’s primary duties were managerial, and he had the authority to recommend hiring, promoting, or firing direct reports making him an exempt employee.

This case made it to the appeals court where the court determined that the employee did qualify for overtime pay because Total Management Solutions could not prove the employee’s management activities. In addition, the employee never recommended hiring, firing, or promoting other employees, and disputed ever having such authority.

Total Management Solutions could only come up with one example of when the employee recommended disciplinary action, but did not actually perform the discipline.

Employer Takeaway: Just because an employee has the word “manager” in their title or has direct reports does not necessarily make that employee exempt. Look at the employee’s overall job functions and the authority that the employee possesses before classifying as exempt.

Watch our webinar recording with CEO of HR on Demand, Jorge Rivero, to learn more about how employers can avoid getting sued for employee misclassification. 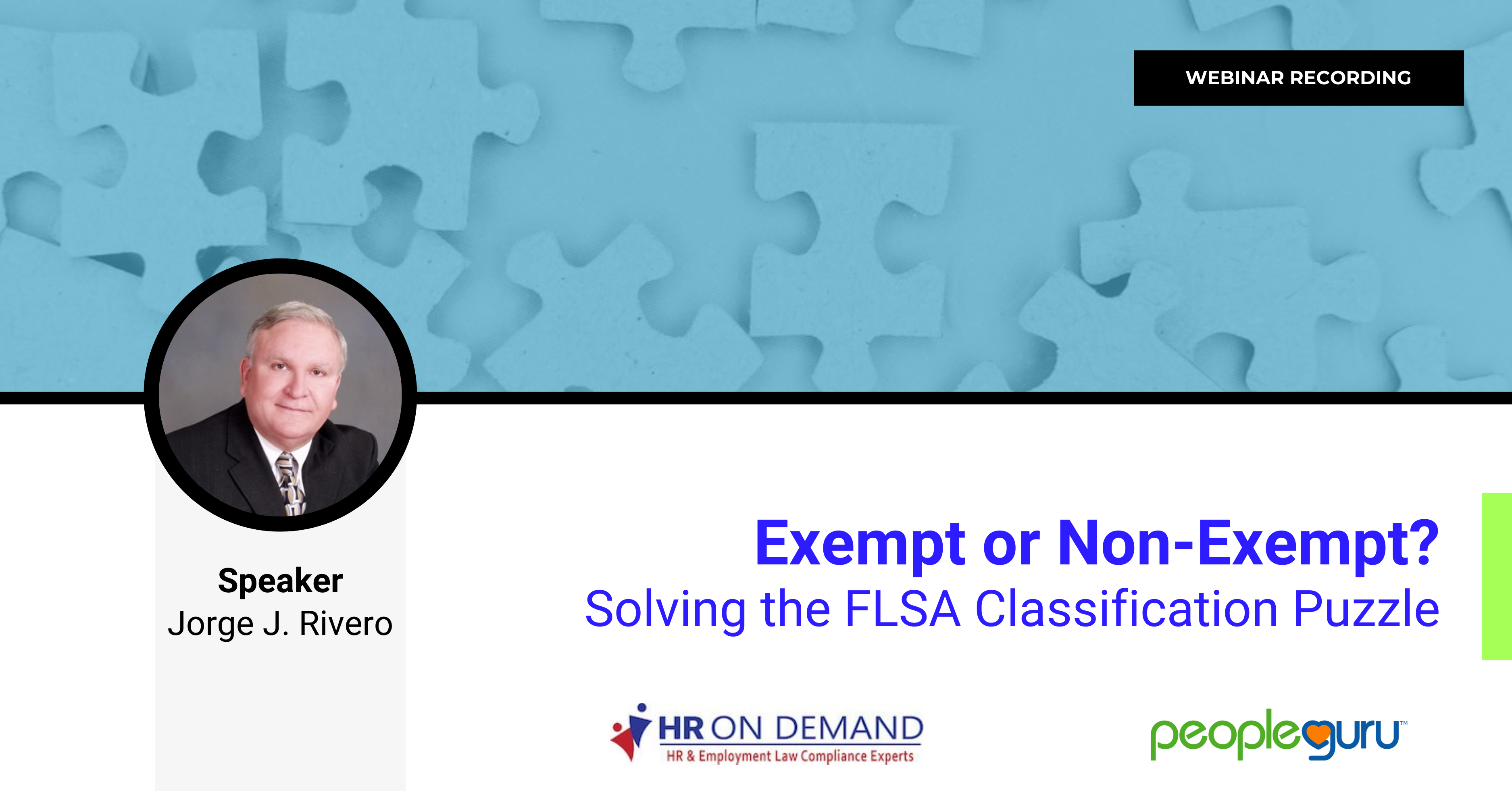 This post was written by Allyson Edwards and may not be copied or published without PeopleGuru's express written permission.